The Thing that Meant the Most — stories, one-liners, and little league baseball advice

My dad’s memorial service was last Saturday, and it was the first time my two brothers and I got to be in the same place since 2019.

Time gets more and more nuts the older you get—the simultaneous slow-fast fake-out.

My brother Ben hopped on a plane from Mexico City (where he was working at the time) to Spain (where his girlfriend lived) when the pandemic began, and he’s been there since March of ’20.

They’re about to move to Mallorca 🏖☀️, so Melissa and I are dreaming up ways we can get a 3 and 4 year old to chill on a transatlantic flight. 😎

But you know what that’s like when you haven’t seen that loved one in too long, and then you see them, and it’s like you were just discussing the final season of Kimmy Schmidt over a <$3 latte.

One of my favorite things about my dad’s service, though, was seeing my little brother pull one-liners outa nowhere.

At one point, he began to well up and paused for a while. The keyboard player filled in with a few soft chords, and Ben commented, “They’re playing me off.”

Buoying grief up with laughter is one of our greatest human gifts.

We three brothers got to have a tag team story time near the end of the service.

Joel recounted Dad teaching him to dive in a motel pool in 1980 when he took him along on a rope selling trip. I’ll never forget the beautiful image of Dad treading water and urging little Joel to go for it—he was there to catch him.

Ben told everyone about the time Dad gave him the Lowe’s business card and the go-ahead to build an art studio in the old room above Dad’s warehouse office—how he made a space for him to tinker and figure things out. It paid off. There’s not much Ben can’t figure out.

And I shared the time Dad visited me in Tucson when I got to go on for Raoul in Phantom. He grabbed my shoulder after the show, and his face said, “You did the thing, son.”

But the thing I remember the most about that visit was Dad telling me the crew’s words about me meant the most to him — that they appreciated working with me. To Dad, knowing I was a kind and generous team member was a lot more important than me having more solos.

The theme I heard over and over on Saturday was this: Dad giving folks money, them trying to refuse it, and Dad saying they would be denying him the blessing of getting to give to them.

I know why one of the words I use in the studio all the time is “generous.”

I learned from my dad that giving is its own reward.

And when we sing, we get to give. That’s free air we breathe in, and the way we give it back is everything.

I got to sing a couple of songs at Dad’s service, and one was with a dear friend of his, Sylvia Lowry, whose voice is very special and straight from the heart.

As we began, I could feel the tears well up and my throat close with emotion.

Then I just heard Dad’s voice from little league before I’d step up to the plate: “You gotta breathe, youngun, and keep your eye on the ball.”

I took a breath, and there was the phrase.

I sensed a special love between Sylvia and me as I watched her sing the first verse, and when I looked in the apparently empty space, I knew in my knower Dad was there with a healing hand on each of our shoulders smiling his wide smile.

If you notice one of those free breaths in your lungs today, turn it into a phrase of a song, and give it generously wherever you are. To yourself totally counts.

I’ve noticed you can’t put a price on that.

I just read a thesis from one of my master’s students, and he concluded his work with, “The most powerful tool a performer has at their disposal is what makes them unique: the way only they can tell the story.”

See? It’s not just me who thinks so—there’s only one you, and folks need to hear the story only you can sing.

ps here’s a special photo of me, Joel holding Noah, Melissa holding Jude, Ben and Ainhoa, and a terrifically messy kitchen island that means we were all together. 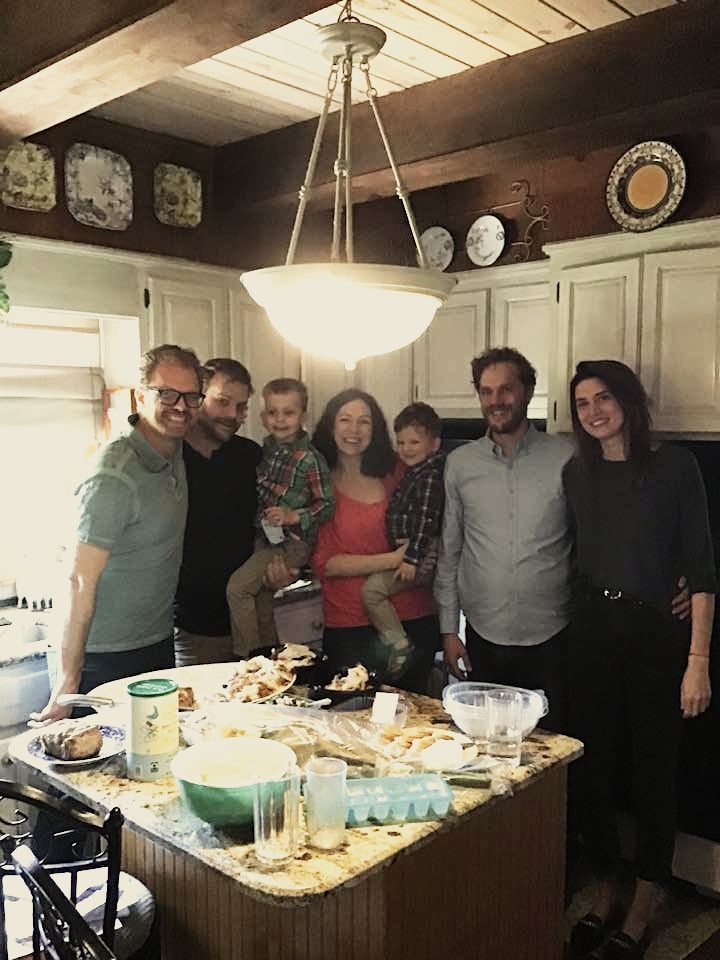