How Sand Toys and Donald Duck Pillows Will Set You Free

…also the thing that got me drug searched in Arkansas

And the pandemic has got me all social anxiety like–ack! there are humans at this slide and swing structure! Retreat!

One thing the playground teaches you is that yes, your instincts speak the truth–some humans are ass clowns.

There’s one shaded park we frequent that sports a quality sandbox and an assortment of donated/discarded play kitchens, water tables, and plastic tractors in need of wheel repair.

Some days I’m on top of the dad game, and I remember the buckets and shovels.

One such day, the boys took a sandbox intermission to climb the wrong way up the twisty slide and left said toys unattended.

ps they didn’t have playgrounds like this when you were a kid, right? I used to DREAM about the metal death jungle gym at the Kernersville Hardee’s–seriously, lie in bed at night fantasizing about that whirley slide injury trap.

Anyway, once the boys, blessed with fancier playground options than I was back in 1918, vacated the vicinity of their sand buckets, a gaggle of stranger-danger children descended upon the dollar store toy trove.

But when lil one-year-old Judelet reached his hand out in an interrogative gesture toward the sand receptacle, this newly arrived towhead decided this dollar store acquisition was hers.

Jerking the bucket to her chest and twisting her torso away from my kid, she emphatically belted, “Mine!”

Daddy defender rose up in me, and before I could rush in to make the situation needlessly dramatic, Jude said, “Okeeey,” and bolted toward the parking lot.

He’s always sprinting toward paved spaces where automobiles may zoom. So I reprioritized.

This whole sand bucket incident got me thinking about you.

How many times have we seen that plastic pail lying there on the ground, and our eyes got all big and shiny like Gollum with the ONE RING?

I’ve done it. For us singery actory folk, it often comes in the form of a role.

We get that audition, and pretty soon, we’re planning the witty opening night cards we’ll design with that joke everyone will think is hilarious. Just me? Embarrassing.

Reminds me of my first day in kindergarten. No one filled me in on how the nap-time cubby system worked.

So when I saw that Donald Duck pillow, I pulled it right out, hugged it to my chest, and announced to my classmates in my best soprano twang, “I got Donald Duck!”

When Mrs. Muncus brought a sobbing Lisa Dalton over to my nap mat, my face flushed, and I realized my kindergarten faux pas.

That wasn’t my Donald Duck pillow at all. You could have gone easier on the shame face, Mrs. Muncus. Honest mistake.

And props to my Mama who bought a pattern and sewed a Donald Duck pillow for me after the incident. Thanks Mama.

And please take a moment to remember when you did get the role. What was that experience like?

For me, it wasn’t one of possession but one of temporary collaboration. I got the chance to stand inside that story and that music for that moment of time.

It’s on my resume, but now I’m listening to the birds sing outside my window rather than the orchestra swelling “Think of meeeee” as the opera box hydraulically slides me on stage. That was cool.

And guess what-y??–that wasn’t my role either. I was the understudy.

The UN-derstudeeeeh? I think that was a line in the first scene of Phantom. See? Can’t even remember.

Same with anything I would have called a possession in my timeline–my orange fisherman hat I wore everywhere in my early twenties comes to mind.

I’m convinced it got me pulled over and searched for drugs in Arkansas en route to Nashville one time.

Also earned me a new moniker in Portland OR when a bright-eyed, possibly homeless street sage looked at me outside Powell’s Books and shouted “Hey, Australia!”

Where is that hat? No clue. I loved it. It wasn’t as cool as I thought it was. And my friend Tregoney Shepherd still calls me Australia.

Wait, look! I found one piece of photographic evidence–Multnomah Falls, OR, I believe. And I’m pretty sure that’s my Lost Colony shirt. 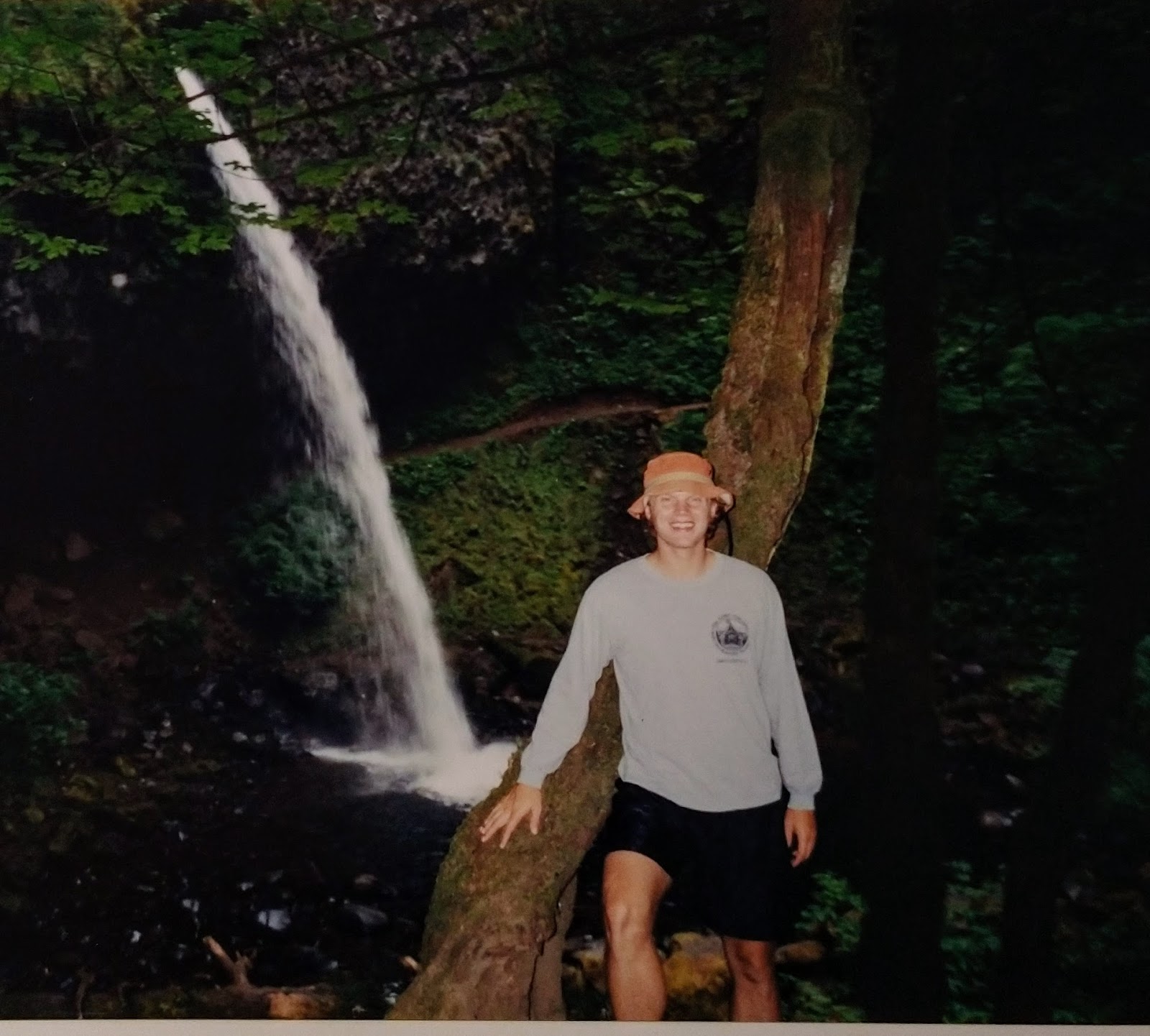 Anything we have the opportunity to stand beside, be near, use–we may have a piece of paper that says we’re the owner, but that merely means that we are responsible for it.

So when the thing doesn’t come your way that you’re convinced should have come your way, can I give you a lil reframe on that?

Maybe you’ve been spared that responsibility.

And maybe that’s an opportunity to say “thank you” instead of “eff you” to the people who didn’t open that door.

You have to move through your feels when Lisa Dalton IDs you as the pillow thief with Mrs. Muncus standing by as kindergarten DA.

Yep, that sand bucket prolly belongs to another kid.

And if you get to use it for a while, I hope you pack that puppy full of playground dirt and make the best castle tower base anyone’s ever seen.

Let’s walk through life appreciating the things we get to stand near, sometimes use, and make nice for the next person.

And most importantly, let’s possess love, compassion, tenderness, and honesty with the one sphere we’ve all been given the responsibility for–ourselves.

You take care of yourself!

Signing off and singing this to you–🎵🎵remember! There’s only one you, and folks need to hear the story that only you can sing.

ps I wanna know your sand bucket story. I have many–a Les Mis national tour (thrice), two Broadway shows where I screwed myself in callbacks, and an exciting academic job opportunity that got canceled because of the pandemic. First 3 that come to mind.

What’s been a sand bucket you realized belonged to another kid? Did you find something else open up as a result, or are you still like, um that’s my damn dirt dumper give it back?

I mean–go for it, see what happens. It’s hard in these recreational equipment streets.

pps The new Pink documentary on Amazon is an unvarnished look into the grindy badassery of Pink, and a very interesting view into the RESPONSIBILITIES she carries with her brand and career. Check it out if you wanna see her family realness on the road and watch her fly like sequined Wonder Woman through Wembley Stadium while belting “So What.” Dang, Pink. Dang.

This site uses Akismet to reduce spam. Learn how your comment data is processed.